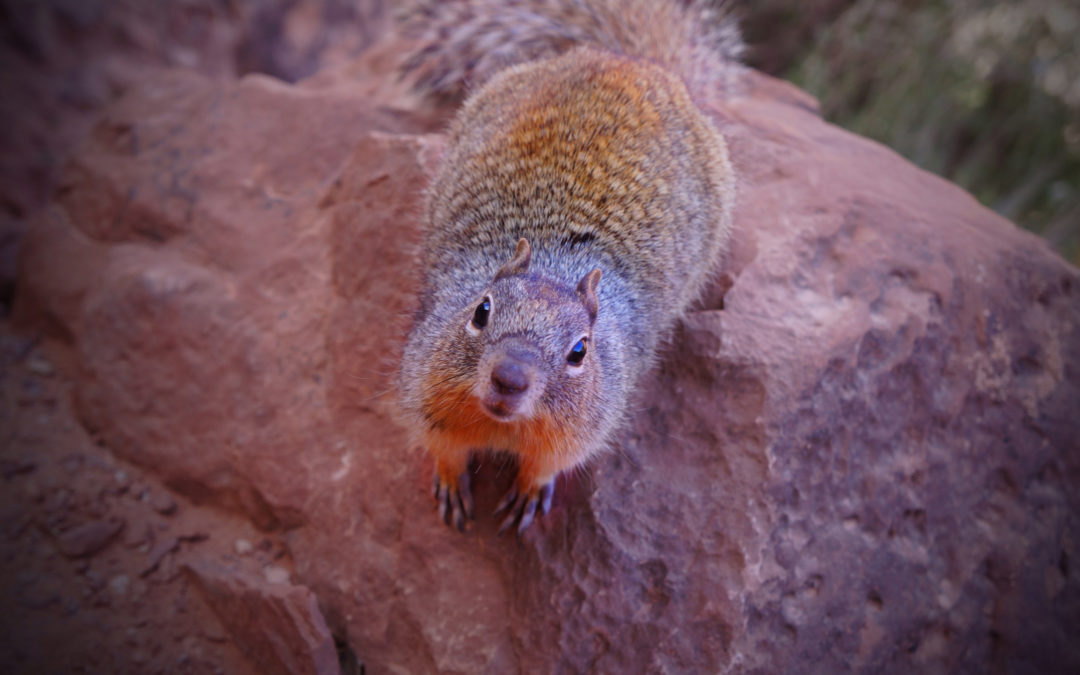 The squirrels (and mice) at heavily trafficked locations below the rim are a high priority issue in the Canyon.  Unfortunately, people think they are helping “these poor starving critters” but in fact, they are driving them far away from their wild roots.  One should note that Cheetos are NOT a natural part of Squirrel diet—for that matter, nor are carrots and beef jerky! And to be sure, their little hands and fingers are ADORABLE and it is so CUTE when they crawl into your lap to help you share your ice cream cone – but don’t be fooled because they are always up to mischief!

Another notable piece of information is that “Black Plague” does exist below the rim and is transmitted via the fleas which live on the rodents (squirrels!).  If for no other reason, do NOT feed the squirrels based on the fact that if you get bit…you just may have contracted PLAGUE! This is not a good thing unless you are auditioning for a role in Les Miserables.

I digress, so back to my story!  ……I head over to the bathroom and once that mission was complete, I ate my lunch (while fighting off squirrels – ever see Tim Burton’s Charlie and the Chocolate Factory where Veruca Salt is attacked by the squirrels because she tried to touch their nuts?) and eventually continued back up the trail towards the rim.   I will say that my pack felt a bit lopsided but I attributed it to a hasty job repacking.  En route to my next stop at Skeleton Point, I kept hearing odd noises which I kept rationalizing as shifting items in my pack and so forth.  Just before Skeleton Point…I feel something really large slam around inside my pack and I know there’s nothing large enough to feel like that in there…at this point, I am curious to be sure.  Just below Skeleton Point, I stop and slide my pack down to the ground for inspection.  I open up the bottom loader entrance and WHOOSH!!!!!!!  Out flies a frantic SQUIRREL!!!!!!!

The squirrel didn’t even look back but my stomach was lodged in my chest—I definitely wasn’t expecting a live and FRANTIC squirrel to launch out of my pack when I opened it.  The morale of this awesome tale is this:  when hiking/backpacking in the “corridor” of Grand Canyon National Park…guard your pack like you’re standing in the middle of New York City!  The squirrel struggle is very real and they bring their A Game!

On a side note, if you have ever been to New York City, you may notice that the squirrels in Central Park are more wild than the Canyon squirrels. I never had one crawl on my lap for a hand out like what happens at the canyon – just sayin’.

Jen Hogan has logged over 6,000 miles below the rim of Grand Canyon National Park and 10s of thousands world-wide, guides for us – Just Roughin’ It. Check out some other articles written by Jen or other staff members at Just Roughin’ It.