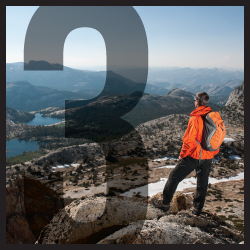 Yosemite National Park has roughly 1,200 square miles spilling over with waterfalls, meadows, giant sequoias, and sprawling wilderness. Yosemite is a national treasure and a beautiful respite for backpackers from all over the world. Its natural riches encourage backpackers to spend days or weeks camping and exploring.

Plan your trip to see as much of the park as possible. That means hit the highlights (can you say Half Dome?) and plan a route that makes sense.

Backpack Must-Haves. Carry only what you can carry. It doesn’t take long to learn the hard way. I learned real quick. Plan your trip according to what you’re capable of doing and carrying on your hike. In other words, don’t plan a six-day drip if you can only carry four days of supplies. Prepare as if the modern world is far away. Many novices think their cell phones will work. Nope, it’s just a glorified camera in places. Calls for help may or may not be transmitted.

Avoid needing to call and make sure your backpack has the following:

Certain factors like the time of year, the number of people you travel with, and the regulations where you choose to backpack also play a role in what you do and do not bring to hike. For example, at Yosemite National Park, regulations regarding campfires and where you can set up your campsite protect the park.

I’ve always liked heading out with a lot of people because everyone sees different things in a different way. And, of course, it spreads the load.

Three Great Yosemite Sites for Backpacking. It’s a truth like no other – every part of Yosemite National Park is ideal for backpacking. Depending on the kind of adventure you want to have at Yosemite, certain destinations will entice more than others.

Part of the 30-mile Yosemite Falls to Snow Peak Loop takes you up the tallest waterfall in the park. Much ground is covered in this three to four day trip. Spend the night atop El Capitan and  you’ll see the Half Dome from there. If you hike Indian Rock and North Dome, it generally has fewer visitors than the Half Dome.

A word to the wise, when you plan to do the Yosemite Falls to Snow Peak Loop hike, start putting in extra time on the elliptical machine because it’s a demanding climb. I always get sore – but it’s a good sore.

Beautiful Red Peak Pass is a lengthy backpacking trip, taking you 51 miles from your starting point over the course of five to six days. This is the most challenging yet rewarding backpacking trip; it is equally exclusive as it is difficult. Think of it this way – at some point you’ll be attempting (and achieving) a trek over and through the 11,150-foot high Red Peak Pass, The payoff is solitude in the High Sierra overlooking the aquatic majesty of Washburn Lake and Ottoway Lake, to name two. Verne and Nevada falls, as well as Little Yosemite Valley, are optional stops along the way.

There are other trips through Yosemite National Park of different lengths that require varying levels of expertise. How you plan to camp (with a group, alone, moving constantly, taking more time in one spot) will impact the length of the trip as well as the amount you pack. No matter which backpacking trip you pick, remember there’s no wrong direction in Yosemite.